The sun is still out. Although it’s after seven, I am so happy with myself for taking some time today to really work. I finished a piece of art today because I wanted to, and not because bedtime was looming and I still hadn’t produced for my blog project. It is a pastel and pencil drawing.

As always I had no idea what I wanted to do when I started. I looked around my studio and at some photos that I had either taken myself, or at some time in the past clipped from a magazine for the “to do” pile. There are a lot of pictures in that pile, I’m ashamed to say how many. I took more than two thousand photos in Paris in 2009, that makes up most of the pile. I reassured myself continually that I would some day “work”. Setting aside ideas made the illusion seem that much more real. As long as I had projects for the future it meant I wasn’t giving up on myself, when in fact I had given up a long time ago. That again is another source of pain for me. When I think of the countless hours I spent organizing my photos, my supplies, and rearranging my studio, I could cry. All it was was a way to avoid the reality of not being good enough. Money spent, not wasted so to speak because the supplies are all still there waiting to be used, but I honestly have enough “stuff” to fill three lifetimes. I was playing at being an artist. Doing a project here and there so I could lay claim to the title because it was the only part of me that I hadn’t given to my family. I stopped working a time-clock job in 1994, I did a few murals in Chicago, did more than my share of craft shows, and even entered a painting that was accepted into a museum show here in town. The reality is I gave all of me to my husband and children. Do I have regrets? Yes, but none having to do with time I gave them, but for the hours lost when Dan was at work and the kids were in school when I could have given myself permission to be more than “mom” or “wife”. Instead I felt guilty of every moment I gave myself. Days were spent cleaning, rearranging, making things as special as I could for them. They all have nightmare memories of craft shows, when the night before they were frantically helping me to finish things because I hadn’t given myself the time. I’m sure more than a few people wondered how many strip clubs my husband went to, he was covered in glitter for days. And at the shows I found myself being approached by people asking me why I was there, telling me my work was too good. I didn’t have enough faith in myself to believe it.

I have written here before and will write it again and again until I believe it. I am an artist.

2 thoughts on “I Am An Artist” 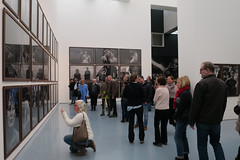 The leading source of art coverage since 1902.