Home » art » What Makes An Artist?

I’ll begin tonight with a definition. I of course have my own theory, but I will give you one I googled, and found on The Free Dictionary.

1. One, such as a painter, sculptor, or writer, who is able by virtue of imagination and talent or skill to create works of aesthetic value, especially in the fine arts.
2. A person whose work shows exceptional creative ability or skill: You are an artist in the kitchen.
3. One, such as an actor or singer, who works in the performing arts. 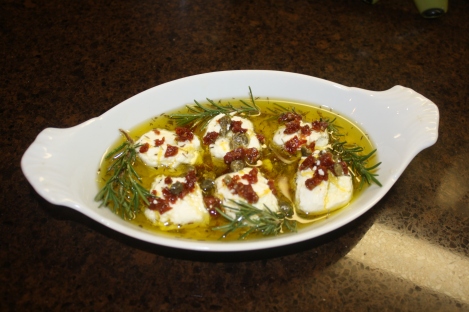 If you are curious about the food photo, the explanation lies ahead, and at the end of this paragraph a photo of our bedroom, all in an effort to prove a point. I bring this up because of the conversation that I wrote about the other evening, (OK, I’m obsessing. It’s a problem of mine) but I also had an encounter a few months back that stuck with me. I was having coffee with a friend at Starbucks, we ran into two women, one of whom I had met before. I was introduced to the other woman as an artist. I didn’t bring it up, I usually don’t unless asked what I do. Many people, including family, refer to me as a “housewife”. Let me begin by saying I have no problem with the housewife label, I don’t work outside the home except for occasional odd artistic jobs. But I am first and foremost an artist. My entire home is a work of art. There isn’t a single square inch that hasn’t been creatively transformed by me, including my garden. I work hard every single day, and every day I do something artistic. For me creativity is as natural as breathing. If I’m not working on an art project, I’m photographing something, or I’m cooking a meal that would knock your socks off, and that meal would be very artistically arranged on a plate, a particular plate since I have way too many plates, all white, in an effort to display my food in the most beautiful manner possible, and more than likely taking a photo of that meal. Whew! Long sentence, but all true. (So that’s why the food photo) When I was introduced as an artist to this woman I was meeting for the first time, she turned and said, “An artist? Are you a real artist, I mean do you sell your work?” Oh I’m sorry, I didn’t realize that unless I turn a profit I’m not a real artist. She apparently never heard of all of the great artists whose work was worth zip until they were six feet under. The conversation of the other night was headed in that same direction. No, I don’t have training, and yes, I have nothing hanging in a gallery for sale, but I am an artist, just one without a profit sheet.

For tonight I revisited another orphan tucked away in the studio. I chose this one in particular because tomorrow is Father’s Day. My father-in-law passed away five years ago in July. He was a really lovely man who I liked very, very much. Last year I decided to paint a vignette of some of his belongings as a gift for my husband. Like so many other paintings before it, I gave up. I have felt bad about not finishing it, but I wanted Dan to love it, and I didn’t feel like I was good enough to paint this painting. I was at times sorry that I started the project because for me, (and I never told him this) I thought that the fact that it was unfinished only proved to Dan that I wasn’t good enough to do so. He has never shown anything but complete support for me, I was putting my crap on him. So much of the world around me has not given me the respect I deserve for my work. No schooling, no paintings currently for sale, but I have more talent than many of the “professionals” can claim ownership of. I don’t care for a great deal of modern art. I am entitled to that opinion, but I would never dare to say that the people who paint them are not artists because I dislike the work. When I spoke to Dan about this subject earlier this evening he said, “A baseball player is a baseball player, not just because he plays in the major leagues.” To use his analogy, I have “major league” talent, but I skipped spring training, much of the season is past, but I think I’m beginning to realize that I might just play in the all-star game and possibly the world series. I am feeling more confident in my painting daily. Dare I say it? Even a little fearless.
Oil on canvas, and I am proud to say it is almost finished. (Only because the Hawk’s are in the Stanley Cup, and we went out to watch the game. Maybe I should have used a hockey analogy instead)