Home » art » One More For The Road

Headed home tomorrow and not a moment too soon. As I felt the tug of war in my heart this week between Chicago and Temecula, I was also feeling something else…unwell. I believe the scales are tipping in favor of Temecula, or Southern California in general. As much as I love Chicago, it doesn’t always love me. I had so many respiratory infections when I lived here that I could just call my doc, tell him it was that time of year again, and he would prescribe medicine via the phone. We arrived a week ago today, by Monday I wasn’t feeling great, by Thursday I thought I had dodged a bullet, but today I feel like I’m one day away from a respiratory infection once again. I actually left Chicago with Bronchitis, the first person I met when I moved to Temecula was my pharmacist, Darryl. We don’t see each other as often as we used to, and although he is a lovely person, I wouldn’t be upset if I didn’t have to see him for a while. So tonight I’ll be making it short.

While I was visiting my Dad I had the opportunity of going through old photo albums. I love old family photos. I’ve used some of them in art work, and I have a very special project in mind for my Dad using some photos I took this time. I’ve actually had a great deal of luck photographing the photos. I don’t need the originals. My phone takes great pics and I spent a day taking photos of some of the pictures I wanted. When I was thinking about what I might want to paint today, I glanced through all the photos on my phone for inspiration. I came across a photo of my cousin Gavin. It is a photo taken in Ireland, where he lives, and it is when he was a child. I loved the expression on his face in the picture. Watercolor once again. 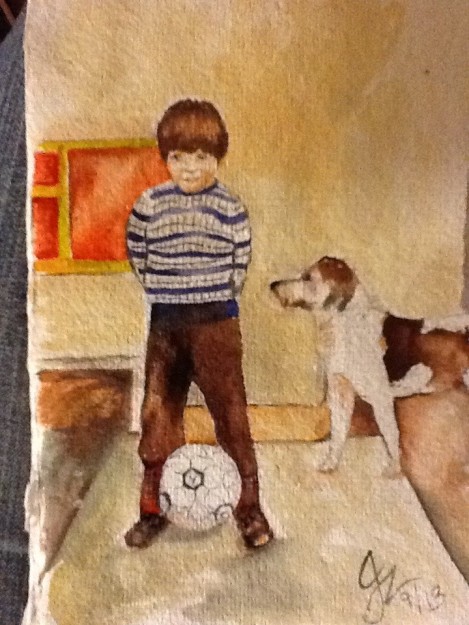