Still tired from our travels, I was shortsighted and scheduled a doctor’s appointment for 8 a.m. this morning. Even the nurse told me I was crazy. That led me to a sort of six degrees of separation topic for tonight. That would be all of the things that drive me crazy at the doctor’s office. Such as…

I was a new patient today, and being the regimented little soldier that I am I followed instructions. Be here at eight they said, so I was. Except that the reason to be there at eight was to fill out the new patient forms, the same forms they sent me in the mail a week and a half ago and told me to have filled out at my first appointment. Of course I had filled them out, they told me too, but then they also told me to be there at eight so that I could sit in their waiting room and waste a half hour of my life that I will never get back.

Can anyone tell me the reason that the new patient forms asked the date of my birth eleven times? It might be that with all the questions I had to answer I aged in the process. Or the need for my driver’s license number. Are they planning on writing me a ticket? They claim it is so that they know it is me. That’s right, I enjoy being poked and prodded so much that I assume the identity of other people so I can take their turn.

Is it me, or do the receptionists time it so that you don’t get taken back to start your exam until you get to the middle of the article in the year old magazine? That way you will never know what happened at the end of your story. One more unanswered question in your life.

Speaking of the moldy magazines. Today I was reading a magazine that is published locally, I found a piece on a new art exhibit opening. It was exactly the kind of thing I like to do. Too bad it was over more than a year ago, the magazine was the February 2012 issue.

Finally, I’m in the room. The doctor will be in “momentarily”. Dear doctor, you are very educated, much more so than me, but unless we went to really different grammar schools “moment” means, ” a very brief  period of time.” It does not mean that I sit in a freezing cold room missing a portion of my clothing, on the meat slab table for what seems like forever, because your day is running late. My day runs late sometimes, but if I show up late for my appointment you won’t see me. I think if your days starts to run late you should call me and ask me to come a little later.

As I sat there waiting today, very nervous because there was the possibility of some bad news, I thought to myself, “How do you draw fear?”  (See illustration below) 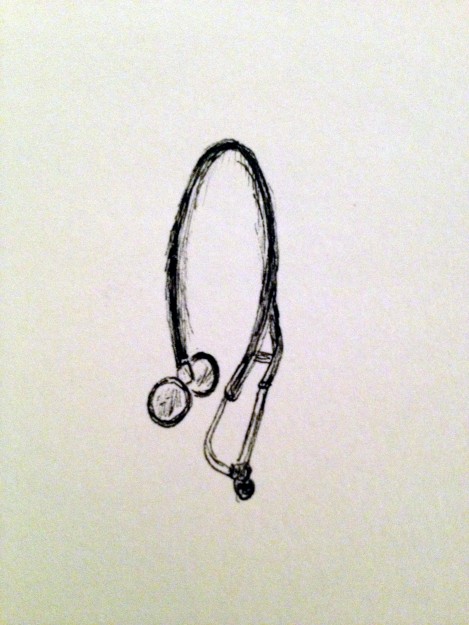 Now that I have had my rant, lets talk about the art. Lately I have found myself really interested in vintage book covers. There was a time before dust covers where the art on the cover of a book was incredibly beautiful. Inspired by that I began some pen and ink work tonight. I’m not sure where I’m going with it as of yet, just enjoying the process. Oh wait, maybe I could write a book on the difference in the time/space continuum that exists inside a doctor’s office. 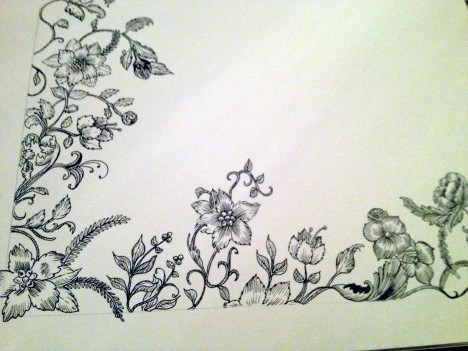