Home » art » One Of My Favorite Things

I apologize. For what you ask? For last night’s rant about the collections of mass-produced “stuff” that other people have in their homes. I was plagued with Catholic guilt for the better part of my day in the off-chance that I may have offended someone I like. Forgive me, in my defense I believe I was so traumatized by the death of Bambi’s mother that I have a phobia of Disney characters. There is also my deep-seated rage caused by the song “It’s A Small World.” I don’t know of a single person that can hear that song and not want to commit murderous destruction of a marionette. (Puppets also creep me out. Topic for a later post). An ear worm of the worst kind. I can almost visualize it, like the earwig in The Wrath Of Khan, (Star Trek movie). So forgive me, it must be obvious By now that I have issues.

Last night I also wrote about my own collections. I had intended to paint today, but other pressing pumpkin carving issues got in the way. I looked at a few of my collections, and trust me there are many, and finally settled on a hand-held mirror that I have owned for about twenty-five years. It was a gift from my mother in law upon my engagement to Dan. It is one of my absolute favorite things. One of the things I appreciate about vintage items is the workmanship. These days of mass production just don’t make items like this mirror anymore. I actually own four hand-held  mirrors, but again, this is my favorite. A pen and ink, along with some pencil shading. I am thinking it might be just the thing to put on the door of the Ladies Room at our new place. 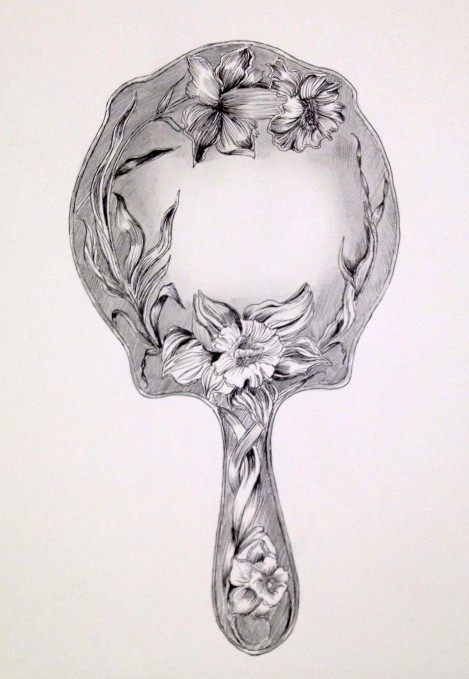 One thought on “One Of My Favorite Things”